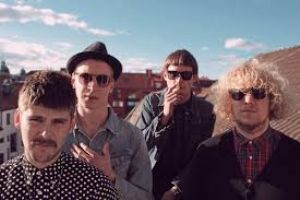 The Bongo Club are certain you don’t need any computers, backtracks or DJs to deliver some reckless music and still get your audience active and all sweaty with nothing but a bunch of great songs and a wildperformance. These kids from the small town Borås in Sweden write catchy songs, sometimes adding almost too much rhythm, but always ready to get the hell out on some deadly melodies and a really tight beat. Their sound is related to some of the great british indie rock bands, which is not a secret they just add their young, hyper energy and some more bounce to the music.The debut album is recorded and set for release in September, and they willdefinitely travel as much as possible to prove that there is no show like an authentic rock show. The Bongo Club likes to think so and they got the songs, the energy and the beat to back it all up.